You are here: Home / Debt / How to Work Out Settlements With Debt Collectors 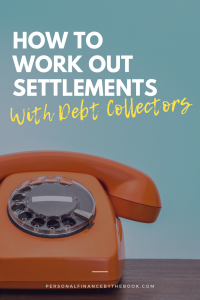 Last week I popped a few buttons sharing how my son Jeremy and his wife Erin worked and sacrificed to eliminate all of their debt ($21,500) in their first year of marriage. I mentioned in that post that Jeremy and Erin had negotiated settlements on two old debts that had been sold to collectors. In this post, I want to walk through the settlement process of working with debt collectors.

Should We Try To Settle With Debt Collectors?

Jeremy called me concerning these debts, “Dad, I am thinking that we could work out settlements with these collectors. What do you think?”

Before answering this question, I asked Jeremy three questions:

1. Are you behind on your payments?

If so, how much behind? As long as creditors are receiving their payments, they have no motivation to accept less than full payment. It is only when they are nervous about getting paid that they are open to discussion of a settlement. Both of these debts were over a year behind, which made them valid candidates for settlements.

2. Do you have ready cash available?

There would be no point in asking for a settlement if they did not have the cash ready to settle with. Jeremy and Erin had a little over $1,200 available: not enough to settle with both collectors, but hopefully enough for one.

3. Do you have any qualms about paying less than full amount for a debt?

I wanted to make sure Jeremy and Erin would not feel that seeking a settlement would cause them to feel like they were trying to weasel out of paying their debts. They were totally fine with requesting a settlement; they reasoned that they were only asking, and if the collector agreed, it would be a win-win for both parties.

Our answer, therefore, was “Yes, they should seek a settlement.”

What is Our Strategy?

Before starting on the settlement quest, we laid out three guidelines:

1. Make sure the collector has given a written validation notice of the debt.

The Federal Trade Commission requires all collectors to do so within five days after they first contact you.

2. Make sure the collector sends you written approval of any settlement.

This letter should clearly state that the agreed to amount will settle the debt in full.

Given account and routing numbers, some collectors will lie and take more money than agreed to. The transaction is cleaner by paying with a Cashier’s Check.

Because they only had enough available cash to settle with one of these collectors, we agreed to try to settle with the one they had been most recently in contact with. They therefore contacted this agency, who first agreed to a $1,200 settlement, but called back almost immediately to tell Jeremy and Erin NOT to send any money because their debt was going to be sold to another collector. Although this sounded a bit fishy, our couple contacted the other collector, who was very polite and professional in accepting the $1,200 settlement offer. This collector, having already sent a validation notice, followed up immediately with the letter stating that $1,200 would settle the debt in full. Our kids got them paid and out of their lives.

If the first debt had been sold, Jeremy and Erin were not notified. Months went by and they concentrated on getting other debts paid off. Then, after a nine month hiatus, the calls started…and it was the very same collector who had told them not to send money because the debt was being sold to another collector. Confusing? Yes! It seemed incredible that, after zero contact for nine months, they now felt compelled to call 10 times a day. The collector would not acknowledge any previous agreement of a settlement, and when pushed about it, threatened to sue and jacked the debt up another $500 (interest and late fees). However, they sent nothing in writing. The telephone tirades were not only stressful for my kids, but pointless. I advised them to send a letter asking for a written validation notice and also offering to settle the debt for $1,200. They sent the letter, certified mail, return receipt requested and then waited. Magically, the calls ceased and within a week they received, in writing, the validation along with the written agreement to the settlement. Jeremy and Erin, just to be safe, paid with a Cashier’s Check and spent about $20 to send it overnight mail, return receipt requested. They got the receipt and have it, along with copies of all correspondence, in a file they plan to hang onto forever.

As we stated, the happy couple is now debt free and committed to never go into debt again. Dealing with a nasty collector is a powerful anchor to the negative consequences of getting in over their heads. Thanks to Mr. Nasty, I am convinced Jeremy and Erin will never have to deal with another collector.

What experiences have you had dealing with collectors and attempting to settle old debts?

Also check out a guest post I did at Good Financial Cents on Should You Do a Debt Consolidation Loan?