You are here: Home / Debt / Difference Between Debt and Deficit 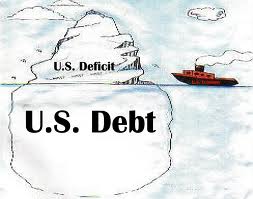 I can’t tell you how many times I’ve heard the words debt and deficit thrown around on the news this year.  It seems like every time I turned on the TV or read an economic article, people would make it a point to talk about our nation’s debt and the budget deficits.  But what’s interesting is that I rarely see anything that explains the difference between the two and how they’re related.

How the word DEBT affects you.

The United States is in debt to the tune of $14.5 trillion, and most of it is owed to people who bought Treasury bills, notes, and bonds.  Those are government issued securities which are sold to investors (like you and me or foreign countries).  The rest of the debt is actually owed to the Government itself.  You heard correctly – the Government owes itself money because it has borrowed from other areas like Social Security and other trust funds.

The debt is huge and the interest owed is even more shocking.  In 2010, the interest alone was $414 billion and was the fifth largest expenditure for the government.  That’s $1.3 billion dollars a day in interest.  The issue is obvious – the more debt there is, the harder it will be to come out from under it.  The US debt affects all of us because it has grown so large and has tapped into other trust funds like Social Security.

What the word DEFICIT means for the DEBT

Put simply, a deficit happens when you spend more than you earn.  It happens with individuals, businesses, states, and national governments.  Every year that a government runs a deficit, it adds to the total amount of debt – you know, that $14.5 trillion we mentioned earlier.

While you wouldn’t spend more than you earn (at least I hope you wouldn’t…) the government actually doesn’t mind (groundbreaking, right).  The reason behind this thought is that many economists think that government can stimulate economies by running deficits.  The problem, as you’re probably aware, is that in order to correct a deficit, you need to decrease spending or increase income – yes raise taxes.

Ok, I know the economy is complex, but the basic concepts are simple.  Don’t spend more than you can bring in.  Why is that so hard to implement?  Because people are used to it.  We’re used to having debt in our own lives and we’re used to the government spending more than it brings in.

Unfortunately, we can’t control the trillion-dollar wallet of the government, but we can control our own wallets.  We can run deficits on a personal level and build our own debt if we don’t put spending in its place or satisfy it with extra income through side jobs.

If you weren’t sure how the terms debt and deficit were related, I hope this helps you to put it into perspective.

If you were familiar with the terms already, my question to you is this: How do you feel about the U.S. debt and ongoing budget deficits?  Do they worry you, or do you think it’ll work itself out in the end?

Tim is a personal finance writer at Faith and Finance a Christian financial help blog that provides financial insights for individuals, businesses, and churches. Outside of finance, Tim enjoys spending time with his wife, playing the saxophone, reading economics books, and a good game of RISK or Catan. Find him on Twitter and Facebook and subscribe to the Faith and Finance RSS feed.