You are here: Home / Debt / Debt Consolidation and Debt Settlement: Know the Difference 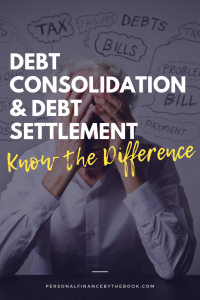 Whereas debt consolidation companies and debt settlement companies have some similarities (with both, you send one monthly payment in lieu of several), they are, in reality, quite different. Allow me to explain.

Debt consolidation companies are lenders who will consolidate your various debts into one loan, often at a lower payment than the total of your current payments. Sounds good, right? But beware: lower payments often mean you are stretching your debt over a longer period of time. Beware also of a false feeling of accomplishment; some borrowers, because they no longer receive those credit card statements, convince themselves that they have taken care of their debt. Wrong! It has simply been moved. In fact, according to the Dave Ramsey web site, 78% of those who take out debt consolidation loans allow the original debt to grow back. Can a debt consolidation loan help? Yes…if you trade several high interest loans for a single lower interest loan AND change the habits which created the debt in the first place.

Debt settlement, on the other hand, is a strategy to withhold payment from your creditors, hoping they will be become so concerned that they will eventually accept less total payment (called a settlement) to erase the debt. It works like this: the consumer sends monthly payments to the debt settlement company, who places them into an escrow account while waiting until the creditors are worried enough to agree to a settlement. The money in the escrow is then used to make this settlement.

The best debt strategy is to develop a budget, tighten your lifestyle, get an extra job (or two) and attack the debt with ferocity.

Readers: have you used either a debt consolidation or debt settlement company?  How did it go?