You are here: Home / Debt / How Does a Payday Loan Work? 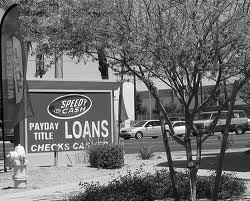 A payday loan (also referred to a payday advance) is a small, short-term loan which is secured against the borrower’s next pay check. Most lenders will require some verification of employment or income, such as a pay stub or bank statement.

How does a payday loan work?

John and Judy (our fictional couple) have no savings, no emergency fund and bills due. John therefore visits a payday loan company, shows his pay stub and walks out with $200 cash in his pocket. John is expected to return to the  office in two weeks – on his next payday – to pay back the $200 loan and the $30 fees (a typical amount). In case he might not make it, the lender required a post-dated check for $230.

What if all goes well?

If all goes well, John and Judy will pay back the loan on time. The crisis was averted, the bills got paid and our couple are out $30. This being said, John and Judy, who are already living paycheck to paycheck, could be setting themselves up for an ongoing cycle of payday loans by obligating a portion of each check to the payday loan company.

But what if all does not go well?

What if John and Judy aren’t able to make that $230 payment? What if their checking account does not have funds to cover that post-dated check? Our couple would now owe additional fees to the lender plus a bounced check fee to the bank . . . charges which could easily add another $100 to the $230 owed for a $200 cash advance. That $200 loan, in two weeks, has ballooned to $330 – which they don’t have. Those fees, of course, will continue to build as long as the debt isn’t paid.

You get the idea. Payday loans, at best, are extremely high interest (390% APR in my example) short term loans. At worst, they can entrap a family into an escalating debt which could lead to repossessions, foreclosure and bankruptcy. Maybe this is why payday loans are regulated in 37 states and illegal in the other 13 states. Perhaps this is why federal law, in 2007, capped the interest rates at 36% APR for payday loans to military personnel. These loans have been tabbed “predatory” with good cause.

What should John and Judy have done?

Payday loan companies claim to provide a needed service for those who have trouble obtaining a conventional loan. I disagree. This service wouldn’t be “needed” if the John and Judys of this world did not have a debt mentality in the first place. I happen to think of payday loan companies as lowlife lenders, but I also realize that they don’t force anyone to take their loans. That choice, and the ensuing ramifications, rests fully on the shoulders of those who seek their services.

If you don’t play with snakes, you won’t get bitten.

Have you ever taken out a payday loan? How did it go? Leave a comment!

This article was originally published on April 23, 2012.