You are here: Home / Debt / Why America Is Doomed to Debt 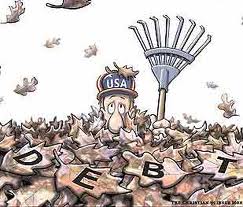 Fixing the national debt is not about politics or economics; it is about human nature.

As President Obama’s bi-partisan deficit reduction commission is nearing their December 1 deadline for a united attack on our federal deficit, numerous ideas are being considered.  This commission, along with a separate19-member group sponsored by the Bipartisan Policy Center, are suggesting such ideas as:

An Apt Description of the Debt Problem

Former Senator Pete V. Domenici of New Mexico, who was the senior Republican on the Senate Budget Committee for more than a quarter-century, correctly assesses the quandary, “This problem is so big, so obvious and yet so hard to solve. And it’s not going to be solved unless and until the leadership on both sides and the president decide that it is big enough to be considered a war.”

With current national debt of $13.7 Trillion (see Real Time National Debt Clock) and projected national debt of $19.6 trillion by 2015, I agree with Domenici.  I am not a cynic or a pessimist, and I hope I am wrong, but, as I reiterate: this is about human nature.

What am I talking about? Human beings are basically self-centered.

This one attribute will kill efforts to put sanity into our federal deficit.  Why?  Three reasons:

1) We will transfer the problem.

Although no one knows how long we can corporately tread water, we will try to prolong the eventual collapse by tweaking the system instead of fixing it.  Worded differently, “We are going to protect our own generation even it we have to build a time bomb for future generations”  Self centered?  You bet.

We want our national problem fixed, but won’t give an inch when our own special interests are threatened.  Some are already carping about the commission’s idea of raising Social Security age to 68 by 2050 and to 69 by 2075.  What?  This is a very minor adjustment for a broken system whose trust fund, according to our current administration, will be exhausted in 2037.  My point is that we want someone to make sacrifices as long as that someone isn’t us.  The unemployed don’t want unemployment compensation cut.  College students don’t want their Pell grants cut.  All entitlement recipients want to keep full funding flowing their way.  Reality is this: our current national debt is about $45,000 per citizen, or $124,000 per tax payer.  Does the word “unsustainable” fit?  If our nation is going to ever take on this monster, all Americans must expect to make sacrifices.  Being self centered won’t get the job done.

Our decision makers have their own careers on the line.  I understand that making unpopular decisions – possibly career threatening decisions – is tough.  I am glad I am not in their shoes.  But then I remember: these are public servants.  The vows of their respective offices should challenge every Congressman and Senator to have the backbone to make decisions on one simple standard: “Do what is best for our nation.”  In a time of crisis, doing what is right means being willing to vote for sacrificial cuts even if their whiny constituents vote them out of office.  Making tough decisions goes with the territory.  Sadly, I am not confident our career politicians have that kind of character.  Protecting their own hind sides is simply another form of being self centered.

The cure for our nation’s woes, as former Senator Domenici aptly stated, “… is so big, so obvious and yet so hard to solve.”

I agree.  Either we sacrifice now, under our own terms, or Disaster will overtake us, under his terms.  The choice is ours.

Readers:  Jump in with your thoughts.  Do you think there is any hope America will actually attack its national debt?  What would need to happen?  Is human nature the real culprit?  Am I over-reacting?