You are here: Home / Investing / Why Our Spiraling National Debt Makes the Roth IRA a No Brainer 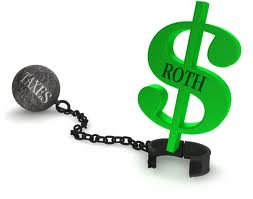 If you could lock in your gasoline price today with the guarantee that it will never go up, wouldn’t you do so?  Of course you would.  I wish I knew how, but I don’t.  However, I do know a way that you can lock in your income tax rates today so that you don’t have to worry about them escalating out of control when you need your retirement money.  It is called the Roth IRA.

Let me explain. With the traditional IRA, you get to deduct the contribution for the tax year it was made, but you will pay taxes when you start drawing the money out for retirement. The Roth IRA, on the other hand, is purchased after you have paid your taxes and is therefore tax free when withdrawn. When deciding which one is best for you, conventional wisdom is that if you believe you will be in a lower tax bracket when you retire, you are better off with the traditional IRA. Why? Because you were able to claim a tax deduction at a higher percentage, but pay those taxes later at a lower percentage.  A lower tax rate is normally assumed if your retirement income will be less than your working income.

But I ask: do you seriously believe that the tax structure when you retire will be essentially the same as it is today? Is it possible that even if your retirement income is less than your working income, your tax rate could be higher than today’s rates?

Why The Roth IRA is a Good Choice

Our current national debt is approaching $16 trillion and climbing by the second … nearly $50,000 per citizen.  As I see it, Congress has four possible choices of dealing with this debt:

Our future tax structure is very uncertain because of our national crash course with debt. Are higher income taxes a certainty? No — but, in my thinking, they are a very high probability. If your retirement income is going to be about the same as your working income, or even a bit less, my recommendation is to lock in that tax rate now with a Roth IRA.  You will never, ever again need to concern yourself about future tax hikes.