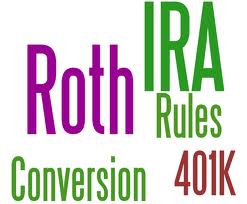 2010 is the big year for Roth Conversions. The $100,000 adjusted gross income threshold is gone forever,  allowing anyone at any income level to convert their traditional IRAs to Roths.   Also, for this year and this year only, Congress has made the conversion not so painful; you are allowed to report  half of the conversion amount on your 2011 tax return and the other half the following year.

As may be expected, new tax rules come fraught with confusion. Yes, the new rules are straightforward enough, but the application brings on questions and misunderstandings. Although my research for this post revealed many myths, these five are the ones I consider most prevalent.

Myth 1: This is the only year you get the opportunity to spread Roth conversion taxes over more than one year.

While it is true that 2010 is your one and only shot at spreading this years conversion taxes over two years, there is no reason why you can’t systematically convert a portion of your regular IRA over any number of years. For example, you could convert $300,000 of traditional IRA to a Roth in six years at $50,000 per year…and pay the taxes on $50,000 each of those six years.

Myth 2: After you convert, you can’t touch your money for five years.

Although you cannot withdraw EARNINGS from a Roth until it has been open for five or more years, your actual contributions are available tax free and penalty free at any time. Your converted amounts can also be accessed tax free at any time, but not without penalty unless you are older than 59 ½.

The IRS considers withdrawals in this order:

Theoretically, you could convert $50,000 today and withdraw it tomorrow tax free and penalty free (if you are over 59 ½ years old.)

Simply not true. Should you convert in 2010, you have until October 15, 2011 to change your mind. Why would you want to “unconvert”? One possibility is that you won’t have the funds at your disposal to pay those taxes. Another is that your projected retirement income will put you in a lower bracket upon retirement. Also, if your account has lost value, undoing the conversion would allow you to prevent paying taxes on money that has disappeared.

Myth 5: You can’t win if you pay the conversion tax with IRA money.

Nearly all financial advisers recommend paying the conversion tax bill with outside money. Doing so indirectly puts more funds into the Roth and maintains the size of the nest egg.   But is it impossible to win by using IRA money to pay the conversion tax?

First, you would need to be over 59 ½ to avoid the 10% early withdrawal penalty on the portion used to pay taxes. Secondly, however, the actual taxes paid are going to be the same either way IF you are paying same effective income tax percentage at time of withdrawal as when the conversion is made.

Therefore, if taxes were a wash, other advantages of the Roth IRA over conventional IRA (tax free withdrawals upon retirement, no RMD at age 70 ½, a “hedge” against future tax increases and a tax-free inheritance for your heirs) could justify using IRA money to pay the conversion taxes.

Some great articles that helped with my research for this post:

What You Need to Know About Roth Conversions at Redeeming Riches

Are New Roth IRA Conversion Rules Meant to be a Short Term Fix for Government? at 20’s Money

2010: Roth Conversions for Everyone

Should You Convert to a Roth IRA?

Readers: Are you taking advantage of the 2010 Roth conversion rules?   Are you planning to convert to Roth in the future?   What is your strategy?