You are here: Home / Credit Cards / Do We Spend More With Credit Cards? A Study Proves … Maybe

Do people really spend more with credit cards than with cash? This topic has been beaten until blue and there seems to be no documented study which proves one way or another. Yes, many of us have heard of the Dunn and Bradstreet study (oft quoted by Dave Ramsey) that indicates people spend 12-18% more when using credit cards, but evidently, according to Money Myths and the Importance of Thinking for Yourself at Get Rich Slowly, that study hasn’t exactly ever happened.

A published study by researchers at Carnegie Mellon, Stanford and MIT, indicates that people  “spend money ’til it hurts”.   The study appears in the journal “Neuron” and is the most recent from the emerging field of neuroeconomics, which looks at the mental processes that drive economic decision-making. 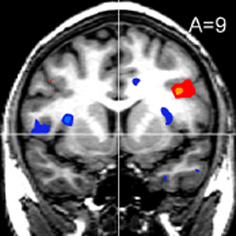 However, before any of you credit card advocates start overdosing on your blood pressure medications, let me quickly assert that this study DID  NOT prove that people spend more with credit cards than with cash; it only gives credence to the theory.

“Credit cards effectively anesthetize the pain of paying,” said George Loewenstein, Carnegie Mellon professor of social and decision sciences (SDS) and co-author of the paper. “You swipe the card and it doesn’t feel like you’re giving anything up to make the purchase, unlike paying cash where you have to hand over bills.”

OK.  How exactly did the study work?

Remember that these people are, uh, brainy.

In the study, 26 adults were each given $20 to spend on a series of products that would be shipped to them. If they made no purchases, they would be able to keep the money.   The participants viewed the products while lying in a functional magnetic resonance imaging (fMRI) scanner while the researchers studied which regions of the brain activated during each participant’s decision-making process.

With the study participants all wired up, the researchers goal was to learn if their brains would register pain when they saw higher prices.  Guess what?  They did.

“We were so excited when we got the results from the first scans, and saw that the insula, a section of the brain associated with pain processing, activated when subjects saw prices that were too high,” said Loewenstein. “It was an electric moment.”

Scott Rick, the SDS graduate student who worked with Lowenstein on the project, was especially excited when they found that insula activation discouraged spending.

“It suggests that prices do not deter spending purely through thoughts of foregone pleasures, as assumed by standard economic theory, but also through immediate pain,” added Rick.

Loewenstein and Rick, along with Cynthia Cryder, also a graduate student in SDS, are continuing their research on the “pain of paying” — the pain one experiences when paying for purchases.

Far be it from me to second guess brainy researchers, but I think they overstated the results of the study.  While giving strong credence that the brain does register pain when prices are too high, Loewenstein took a leap in logic when he said that the study explains why people spend more with credit cards (less pain than cash).  The problem is that he never actually tested the pain using credit cards versus cash; he only proved there is more pain when prices go up.    I wish the researchers, while they had these 26 adults’ brains all wired up up, would have required them to pay cash and then swipe plastic for the same value purpose.  At least we might have been able to have learned if the credit card pain theory was valid.

In the meantime, I suppose we will have to wait for another study to actually prove whether people spend more with credit cards than with cash.

How about you?  Do you personally spend more using credit cards than using cash?  How do you know?