You are here: Home / Dollars and Sense / Why You Should Resolve to be Weird This Year 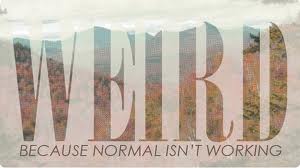 Have you heard these?

I have — in fact I heard these two statements in the past two weeks:  people justifying their dismal financial standing by believing they are normal.  It reminds me of what my mother used to tell me, “Joey, if everyone jumps off a bridge, does it make it right for you to do the same thing?”

Few of us want to be thought of as weird, but following the crowd financially, especially in 21st Century America, is not a good plan.  These stats make my point:

You get my drift…personal finance in America is not a pretty picture.  If we are normal Americans, we will succumb to what our friends, neighbors and acquaintances do.  We will drive cars we can’t afford with money we don’t have to impress people we don’t know.  We will spend hundreds of dollars eating out each month while our savings and our retirement accounts are under funded.   We will buy our furniture and our vacations with borrowed money.  And we will justify our immaturity by telling ourselves, “Everyone I know is doing this.  It can’t be all THAT wrong.”