Jesus never sugar coated his message – rather than inviting any and all to follow him, he consistently spurned those who weren’t willing to lay their very lives on the line. Because following Jesus meant embarking on a life of sacrifice 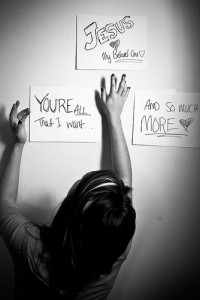 and suffering, there was no place for half – hearted commitments. It had to be all or none.

You get the idea. But what does all of this suffering have to do with our finances? Follow along with me here. I believe that personal finance is more about fiber then formula. Crunching the numbers is an exercise in futility unless one has the fortitude to follow through. “Taking up one’s cross” or “losing one’s life” or “embracing suffering” are qualities of radical people: those of intense focus and willingness to sacrifice for a cause. The one who meets Christ’s criteria as a follower is one who also has the backbone to manage his money well.

He will think before buying.

Jesus insisted on potential followers to think about their decisions before acting. This person is not going to impulse on a bass boat or leather sofa. He will think it through.

He will count the cost.

Jesus commanded his followers to count the cost. One who is a cost counter is not going to purchase anything that does not fit within his budget and his lifestyle. That new car or European vacation will not be an issue for someone who knows how to count costs.

One who chooses to be a disciple of Christ has committed himself to live a disciplined life: a life of order, not chaos. A disciplined person will create a budget and live by it. He will balance his checkbook and will not make unplanned expenditures.

He will sacrifice for the short term to win for the long term.

While Jesus demanded total sacrifice, he also pointed out the reward: the kingdom of heaven belongs to those who are persecuted for doing what God approves. (Mat 5:10)

Those who live by this rule are those who will give up eating out for the short term in order to get out of debt. They will get rid of the $25,000 car that is sucking their budget dry. They will temporarily take on a second job, knowing that the extra effort today will pay dividends tomorrow. In short, those who give all for Christ will likewise be willing to sacrifice their life styles in order to win with their finances for the long term.

I realize that my premise (following Jesus = good money management) is an ideological one. In real life, Christians seem to have as many financial difficulties as those who do not follow Christ. But do these problems disprove my hypothesis? I think not…the failure with finances, I believe, is rooted in failure to follow Jesus in the manner he demands.

I know in my own life, when my finances go adrift, my spiritual life is likewise becoming unanchored. When I put Jesus in his proper place, my finances will start to fall into place.

How about you? Do you agree that following Christ helps your financial life go better? Why or why not?