You are here: Home / Biblical Thoughts On Finance / Should You Leave an Inheritance to Your Children? 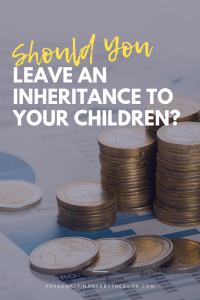 The late Larry Burkett wrote, “If I had to identify the area of Christian finances that is least understood, it would be inheritance. Not only do people wreck their lives by hoarding, but they also wreck the lives of their children and grandchildren with abundant inheritance.”

I have to admit that Burkett got my attention. I simply assumed that we go through life doing the best we can and if there is anything left, it goes to one’s heirs. But we all know of families that have been destroyed by the distribution of an inheritance. Have I simply been wrong with my assumptions? Maybe, but I know this: I need to rethink this issue. Follow along with me to see what we can learn.

What does the Bible say?

The Old Testament law required (Deut 21:17) that the first born son should get 2/3 of the father’s estate. Normally the inheritance was distributed after the death of the father, but the father sometimes decided to divide the inheritance while still living. When the Prodigal Son (Luke 15:12) asked for his share of the property due him, although he was demonstrating great arrogance toward his father’s authority, his request was one the listeners of the parable would have understood.

The biblical principle, therefore, seems to be that inheritances are expected. How does this fit with Burkett’s statement? Burkett did not say NO inheritance, but warned about the dangers of too much inheritance. He further wrote, “Large amounts of money given to children will usually be squandered to their disservice, and large amounts of money stored up for children in trust can be used to buffer them from God’s will.”

The challenge now becomes this: what guidelines could help us determine how much is too much?

Some questions we should be asking ourselves:

Am I hoarding resources?

Great question. And it is all about attitude. If we truly believe that we are God’s property managers, then our attitude is to use His resources to honor Him. This means that we have a plan for every dollar that crosses our paths; a plan to give, save and spend in ways that please God.

Now the biggie: What is the difference between saving and hoarding? Here is a quick and imperfect answer. “Saving” should always be for a defined purpose while “hoarding” is building a bigger and bigger nest egg simply for the sake of having a bigger nest egg.    How much does one need to save for an appropriately sized estate?   Tough call, but in order to prevent hoarding, one needs to establish an upper limit, save that amount, and then use additional windfalls and profits for other purposes.

What amount will be a blessing to my kids?

Burkett warned that large amounts given to children will be squandered. The integrity and money handling skill of the children is a bigger factor than the actual dollar amount of the inheritance, but what safeguards can parents put in place to ensure that this money will be a blessing and not a curse?

I like the idea of sharing it now. Possible advantages are:

On the one hand, they shouldn’t give up assets that they might need in later years. But on the other hand, sharing it now will prevent hoarding.

If the children are wise with it, mom and dad can feel good about future distributions.  “Wise” means that the money is helping them earn their own way, not allowing them to become lazy, dependent or wasteful.

Waiting for the parents to die often puts the children at retirement age before receiving an inheritance. Reality is that they probably could use the money at a much earlier age. Occasional infusions can help with debt reduction, emergency fund or college expenses.

While we don’t want more “Prodigal Sons”, at least we can say that he learned from his mistakes. Likewise, even if mistakes are made (and they will be), the children have time on their side to learn from those mistakes.

If they are receiving their inheritance incrementally during their lifetime, they won’t be putting their lives on hold in hopes that some future windfall is coming their way. It isn’t.

All the money should not necessarily go to the kids. This will vary greatly from family to family, but as property managers for God, parents need to be ever mindful of the best uses for God’s kingdom.

Giving too much too early could some day leave the parents without the retirement revenues they need. This shouldn’t happen if parents plan carefully by paying off all debt, purchasing good health insurance and long term care insurance, and simply thinking things through

A gift is a gift, and well meaning parents need to remember that there are no strings attached.

Larry Burkett said that the issue of inheritance is the least understood area of Christian finance. From the lack of teaching and discussion I hear on this topic, I tend to agree. Because the bible endorses the giving of inheritances, we do too. The real issue, according to Burkett, is the giving of huge inheritances. Such a practice can bring about hoarding for the parents and squandering for the children. The challenge thus becomes this: how can parents best plan to give inheritances that will bring blessings and not curses on their children? One thought is to share the estate incrementally while the parents are still alive. Doing so can help not only prevent hoarding, but monitor the blessing/curse effects of the money.

What are your thoughts on giving an inheritance?  What has worked in your family?  What nightmares have inheritances caused you and why?