You are here: Home / Dollars and Sense / Lessons My Early Morning Paper Route Taught Me 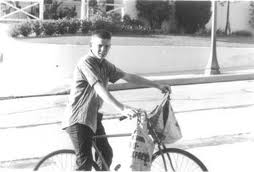 I never received an allowance, nor did I ever expect one.  My older siblings (there were six of us altogether) worked for their spending money, so I always assumed I would do likewise.   Although I picked up a few bucks mowing lawns in the neighborhood, at age 14 I sought and secured my first real job:  an early morning paper route. My responsibilities were:

Although my mom was not overly keen about me riding my bike around town in the pre-dawn hours, my persistence won out over her objections.  That little victory not only boosted my self confidence, but motivated me to succeed.  Furthermore, simply  knowing that I found this job all by myself, that I had responsibilities outside the home and that I was getting paid for my efforts put a bounce in my step.  I was growing up; this first job helped.

How it stuck:  Although I have had many jobs over the years, I have learned that money alone is never enough motivation to stick with a job.  My best pay has always been the self satisfaction that comes from knowing I did my best.

Take the bad with the good.

In good weather, I loved riding my bike in the pre-dawn early morning silence, broken only by the songs of robins and cooing of doves.   However, rain, cold and snow brought their own challenges.  There were times when the snow was so deep that I ended up walking my bike more than I rode it.

How it stuck:  My favorite part of being a highway engineer was fixing a problematic road or bridge.  My least favorite was negotiating union contracts with my work crew.  Fortunately, I had learned early on that one needs to take the bad with the good.

Some people are scoundrels.

Would you believe that some of my customers would hide or simply not answer the door when I came to collect?  I found it hard to handle that adults would stiff a 14 year old trying to make a buck.  But I learned what I call “healthy cynicism” – I never became bitter, but I learned not to trust people until they proved themselves trustworthy.

How it stuck:  My “healthy cynicism” has served me well over the years.  Whether I am dealing with an insurance salesman or a remodeling contractor, I glaze over their sales pitch while checking references and researching their claims.  I always withhold final payment for hired work until it is completed to my satisfaction.

By the time I delivered papers all week long, collected on Saturdays and paid for my newspapers, I developed a perspective on the value of a dollar.  I can’t say I always spent my money wisely, but I always realized what it took for me to get that dollar.

How it stuck: Throughout my life, I have always been frugal (some call me “tight”).  I will research an item every which way but loose before buying it … or deciding that I can live without it.  Whatever I buy, I try to make it last as long as I can.  For example, the vehicles Jan and I drive are over ten years old, and we still live in the same house we bought as newlyweds forty years ago.

I learned to save.

Because of the effort required to earn a dollar, I tended to hang onto those dollars.  I even built up an emergency fund of sorts which tided me over as I learned to stay with my route until after Christmas (the most lucrative time of year for a paper boy), give it up during the bitter months of winter, and find a new paper route when spring weather came.

How it stuck:  During college, I saved every penny I earned during the summer to pay for my next year of school.  I didn’t graduate with zero debt, but I was able to pay off my student loans (including my car) within a year of graduation.  I must admit that Jan and I, over the years, haven’t always saved for every purchase.  But today we wouldn’t consider purchasing anything without saving the money for it first.

Writing this post has helped me realize just how much that very first job has impacted my life.  It set a precedent for work and money management that, fifty years later, continues to be deeply part of my fabric.

Readers: what was your first job?  What lessons did you learn from that job?  How do those lessons continue to impact your life?