You are here: Home / Biblical Thoughts On Finance / Four Lessons From Some Wealthy Beggars

You see the man staggering down the sidewalk. He stumbles, falls, gets up and meanders haphazardly before falling over the curb into the street. As you extend a helping hand you realize that he is nearly naked, his tattered clothing leaving little to the imagination.  Turning your head, you say, “Grab my hand and I will help you up.” 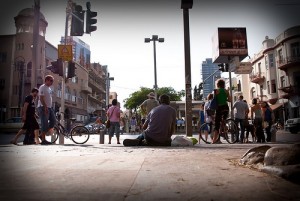 “Why would I need your help?” he barks indignantly. “For your information, I am a very wealthy, prosperous man. I have no needs!” He gets back up and lurches off, bouncing into a light post on his way.

You have just encountered a member of the Laodicean church: a wealthy man who didn’t realize that he was a beggar.

Allow me to explain:

The city of Laodicea was a center of wealth. Known for its black wool and carpets, it also had a medical school famous for its eye salve. The historian Tacitus notes that the city was so affluent that they refused government aid from Rome after the earthquake of A. D. 60. Can you imagine ANY U. S. city refusing FEMA aid after a natural disaster?

They were industrious and innovative, creating a stone aqueduct system to bring water from the hot springs of Hierapolis some six miles away. By the time this water reached Laodicea, however, it was tepid and distasteful.

Yes, they were wealthy, affluent people, surely the envy of all who visited their city. But was Jesus impressed? Not a bit. He called them “pitiful, blind beggars, threadbare and homeless” Rev. 3:17. And he follows up with this command, “Here’s what I want you to do: Buy your gold from me, gold that’s been through the refiner’s fire. Then you’ll be rich. Buy your clothes from me, clothes designed in Heaven. You’ve gone around half-naked long enough. And buy medicine for your eyes from me so you can see, really see.” Rev 3:18.

What are the lessons for us?

1. You can have lots of stuff and be very poor.

If you base your life on attaining the highest net worth possible, you are still very poor. Why? Because life is more than the size of your portfolio. Jesus said to buy gold which has been through a refiner’s fire; gold that has all of the impurities burned out of it. Real wealth for us means having the impurities burnt out of our lives. Faith in Jesus Christ may throw us directly into the fire (1 Peter 1:7) or it could mean simply allowing God to refine us bit by bit. Either way, He will make sure that we are refined.

3.  Their wealth was not evil.

Nowhere in this passage is the slightest indication that the wealth was evil. Having the wealth is not the problem, but allowing the wealth to become predominant is. God wants his children to have the riches of this world, not so we can be caught up in our stuff or become prideful, but so we can help those who are less fortunate.

In spite of their misplaced priorities, their prideful independence and their spiritual blindness, Jesus never gave up on them. He makes these same people this promise,  (Rev 3:20)  “If you hear me call and open the door, I’ll come right in and sit down to supper with you.”

If you ever think that God has abandoned you, look again. He hasn’t moved. You have.

The site of this wealthy metropolis now lies in ruins. Yes, there are remnants of a great theater and part of the aqueduct still exists, but time and nature has reduced the greatness of the city to rubble. These ruins are an object lesson for us…whatever we gain in this world will not last. Only treasures in heaven will. Aren’t those the types of treasures you would like to have?