You are here: Home / Biblical Thoughts On Finance / Dealing With Poor Performance: Lessons From Simon Cowell and Jesus Christ 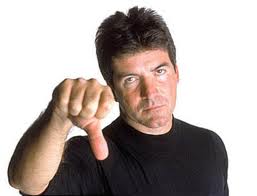 I also played baseball for a coach who wasn’t nice. His face would match his red hair when I made a base running blunder or threw to the wrong base or failed to back up a play. “What were you thinking?” he would implore – his nose about six inches from mine – before seizing that moment to explain exactly what I had done to invoke his anger.

Which of these two do you think was a better coach? The one, of course, who made me a better player…the baseball coach.

Whatever happened to truth?

We live in an era of molly coddling, where “nice” teachers and “nice” administrators will allow a failing student to graduate from high school without attending class or implement no-fail” policies.  Because of this wide spread paranoia of stepping on someone’s self esteem,  I find Simon Cowell’s biting critiques refreshing. Yes, American Idol’s Cowell can be abrasive: he once told contestant Chris Sligh, “I think you murdered the arrangement. . . . you turned a beautiful song into a complete and utter drone.” But just as failing students need to know that they have failed, tone deaf singers need to know they can’t sing. Artificial “atta-boys” which mask truth are a huge disservice to either. I think we can learn much from Simon Cowell.

How did Jesus deal with poor performance?

You get the idea. If you think of Jesus as a “nice” man who would never hurt anyone’s feelings, you have a distorted image of him.

Christ and Cowell deal with poor performance in similar ways

“OK Joe”, you are thinking, “So what if Jesus and Simon Cowell have some similarities? What does this mean to me?”

Great question. It means that we need to grow backbones and learn to “speak the truth in love” Ephesians 4:15.  I am not advocating  meanness or maliciousness, but a deep conviction that the best way to help others is to be honest with them. If you are a parent, a church leader, a school teacher, a boss or simply a friend, I challenge you to speak truth instead of camouflaging it…in love.

Readers:  I covet your thoughts.  Have I gone too far by comparing Christ and Cowell?  How have others in your life helped you by telling you what you needed to hear instead of what you wanted to hear?  When has “truth telling” crossed the line into meanness?  How would you describe your best teachers, coaches and mentors in terms of telling you truth even it it hurt?