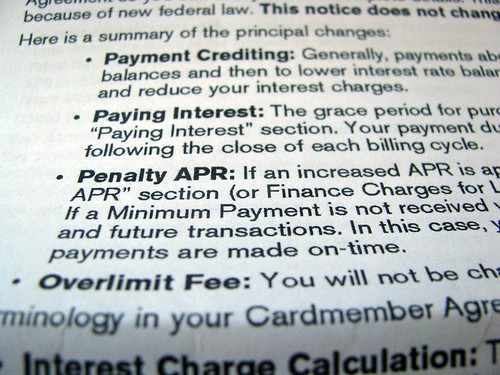 The major changes required by the Credit Card Act of 2009 will kick in on February 22. But just because Congress has tried to stifle the less than stellar side of the credit card industry, don’t think for a moment that banks have been sitting on their heels.

Here’s how the new laws on credit cards of 2010 effect you.

First, an Overview of the Changes

Increases on existing balances will be limited to some certain criteria: the cardholder is 60 days behind in minimum payments, a promotional rate has expired, or the card carries a variable rate. Hint: remember “variable rate”. We will come back to that one.

These shady practices will be outlawed.

Card issuers are required to mail statements at least 21 days before they are due.

When cardholders have accounts with different interest rates (common with 0% balance transfer credit card accounts), any amount above the minimum payment must go toward the highest interest rate (instead of the industry practice of using that extra money on lowest interest portion of the debt).

Transactions that would place the card holder’s account over their limit cannot be processed without prior permission.

Card companies must state clearly how long it will take the card owner to pay off the balance – and the total interest charge – if minimum payments are made.

Card issuers must either verify ability to pay or obtain the signature of a parent or other adult before giving credit to anyone under 21 years old.

Now: What to watch for

“Whoa”, you say, “I thought the new law greatly limited rate hikes. I always pay on time, so how can my rates go up?”

Good question. Remember the phrase “variable rate”? The majority of card holders, even under the new changes, will experience rate hikes due to the variable rate clause. Here’s why: variable rates are meant to follow the rise and fall of the prime rate index. The problem is that the prime rate is currently 3.25%, an historic low. Therefore, when it changes, there is only one direction it will go: up. And so will credit card rates, which currently average 14.9%.

Of course the banks have been pushing variable rate cards. According to CNN Money, 94% of all new credit cards offered in recent months are variable credit, compared to only 67% in the same period two years ago. Admittedly, the prime hasn’t gone up in recent months, but stay on your toes. Your card is most likely a variable rate card, so when prime rate goes up, so will your rate and this could lead to more credit card debt defaults.

If you ran the bank and a new law greatly restricted your ability to raise credit card rates, you would not only promote the variable rate cards, but you would ensure that rates won’t fall below a set floor rate. The logic? “I want the rate hike when the prime goes up, but I don’t want the risk of lower rates.” Very clever, and that is exactly what banks are doing. A year ago, only 10% of banks had enacted such a floor, but a recent study shows over one-third of banks now have established minimum rates.

Unfair? Consumer groups are crying “Foul”, appealing to the Federal Reserve Board to rule against these floors, but no decisions have been made yet.

What should you do?

Debt free is the way to go!