You are here: Home / Random / Things People Accomplished at Your Age 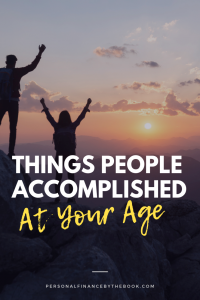 Which of the following emotions are you more likely to feel when reading what other people accomplished at your age: inspiration or depression? I long ago realized that I am not a prodigy, so I am not going to lament the fact that I didn’t write my first classic novel at age 20 – something both Mary Shelly (Frankenstein) and Jane Austen (Pride and Prejudice) achieved – or measure the speed of light when I was 30 (like Physicist Armand H. L. Fizeau).

However, I am inspired by the accomplishments of those who didn’t get their starts early in life. Jean Eugene Atget, now considered one of the world’s greatest photographers, did not begin until he was 40. Renowned American folk artist Grandma Moses did not take up her craft until she was in her 70s and, Terri Tapper, at age 50, became the oldest female certified kiteboard instructor in the USA (and possibly the world).

From the web site Museum of Conceptual Art, these are accomplishments from people of the following ages:

Here is your assignment: Try plugging in your own age at Museum of Conceptual Art to see what other people were doing at that same age.  Then post a comment on the most remarkable one.

Probably the most notable (interesting?) accomplishment of anyone my age (63) was accomplished by Countess Rosa Branicka, a wealthy Polish noble, who performed breast cancer surgery on herself and lived to be 82.

Am I inspired? Well, uhm, maybe I should try kiteboarding.