You are here: Home / Dollars and Sense / Stretch the Life of Your Mower by Giving Him a Name 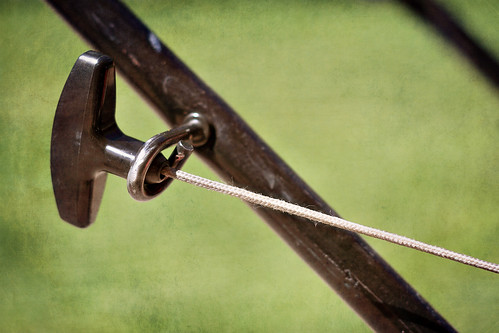 I realize that the best way to stretch the life of your mower is to treat him right. But for those of us who are less than meticulous about equipment maintenance, naming him works pretty well. Read on for the story of Lazarus the Lawn Mower.

When Mr. McCarver, owner of McCarver’s Lawn Mowers and Small Engine Repair, placed the green mower in my new 1990 Silhouette van, he polished it with a shop towel and solemnly addressed me, “Now you need to understand that this mower is made for mowing lawns, not yards. You DO understand, don’t you?.”

“I’m sorry,” I stuttered. “But what is the difference between a yard and a lawn?”

Mr. McCarver gripped the mower tightly as if he might take it back. His voice quivered slightly as he patiently explained, “A lawn is a smooth turf, free of sticks and other debris. A yard is whatever one grows or mows. You ARE going to use this machine for a lawn, aren’t you?”

I knew that I had better agree if I was going to get him to loose his grip, so I murmured, “Sure. A lawn it will be.”

He eyed me suspiciously, but slowly released the mower and handed me the receipt. I jumped in my van and drove away before he changed his mind, but I knew that I was not the type to manicure my yard before mowing it. I silently prayed that Mr. McCarver would never come checking on me.

Still, I tried. The first few years I picked up the big sticks before mowing, and, per Mr. McCarver’s instructions, I even ran all the fuel out of it before storing it in the basement each winter.

But then one winter I sort of forgot. Well, not actually forgot. I just decided that my basement was crowded and maybe leaving it under the deck wouldn’t be a bad idea for just one winter. That next spring it started the first pull. “Maybe”, I mused, “that smarty McCarver doesn’t know everything.”

It was that same spring when I decided that it would be much easier to grind up the sticks with the mower than go to all the trouble of picking them up. I still glanced around to make sure McCarver wasn’t spying on me, but I finished mowing my yard (definitely not a lawn) and felt quite proud of myself.

Thus began a new era in the life of my mower: I started calling him “Old Green” and I left him outside every winter and mowed sticks whenever I wanted. Still, he kept running, year after year. Because the volume of his roar increased gradually, I didn’t really notice or care. Josh, my oldest son, noted one advantage of having Old Green on the job was how he blocked the sound of the passing trains.

Then, one year, Old Green started showing his age. His deck had developed rust spots and the blade was permanently rusted onto the shaft. Feeling a tad of compassion, I started putting a washtub over him when he was not working.

It was that same year that Josh (the son who had made snide remarks about Old Green) called. “Dad, my lawn mower is dead. Can I borrow yours?”

Although I thought he owed Old Green an apology, I consented. “Sure, come get him. Just treat him right.” I realized that I sounded strangely like McCarver, who had long ago closed his shop and moved to the country.

An hour later, Josh was on the phone again, “Dad, I hate to tell you this, but Old Green just quit. He made a loud noise and then stopped dead. I can’t even pull the rope.”

“Sounds like he is done for.” I said. “Roll him out to the curb. If no one grabs him, the trash man will.” I hung up the phone with a lump in my throat. Old Green was finally dead. I went shopping for a new lawnmower, but somehow none of those shiny new ones seemed right, so I returned home empty handed.

Two weeks later Josh called again. “Dad, you won’t believe this. Old Green sat there all this time and no one picked him up. So, just out of curiosity, I pulled the rope and he started right up!”

“Well then, bring him back home.” I began to grin. That was the day we started calling him Lazarus.

Lazarus made his homecoming in fine fashion. He started right up, roared loudly and finished my entire lawn without stopping. This is a good time to mention Lazarus motto: “Once I start, don’t stop me or I won’t start again.” Those were his terms and I respected them.

When Lazarus started getting snagged on some of my smaller lawn bumps, (sorry..YARD bumps) I thought something was seriously wrong with him, but a closer examination revealed that I had hit so many roots that his nose was bent downward. No problem. I turned him upside down and hammered his nose back upward. It was a heady thing for me to be doing bodywork on a lawn mower and Lazarus, with his new nose job, felt so spunky he roared smoothly over the yard like he was new. However, I started noticing that the grass and the ground up sticks were shooting up and hitting me. Those rust spots on the deck had become cancerous. Out came the duct tape. I applied several long strips which didn’t stick all that well to the grimy deck, but succeeded in deflecting the debris stream from shooting directly at me.

Sometime before the season ended, Lazarus decided that his safety bar (the thing that is supposed to kill the engine when you let go of it) didn’t really need to work. This apparent malfunction was no surprise to those of us who already knew his motto.

The following spring, I rolled him out from under the deck, inspected the frayed duct tape and pulled the rope. Twice. With last year’s gasoline in him. And Lazarus responded with his familiar roar. “I am ready for another season,” he screamed as the neighborhood dogs wailed their disapproval.

Lazarus did fine that first mowing, but on his second time out, he let loose a high pitched screech before stopping altogether.  Smoke rolled from him and the pull rope would not budge. I trudged back in the house and gave Janice the bad news, “I think Lazarus’ motor has locked up. I guess he is really gone this time.” There he sat for the rest of the day, right where he died. Occasionally I would go try the rope, but it wouldn’t budge. Finally, at dusk, I concluded that he was really dead, so I went to push him out of the front yard. On a whim, I pulled the rope one more time and Lazarus bellowed to life, scattering the birds from all nearby trees. I was so happy that I mowed the rest of the yard in the dark.

I used him about a dozen more times, but eventually his deck cancer spread, the duct tape wouldn’t hold and I needed safety goggles (a hockey mask would have been better) to protect me from the constant barrage of sticks and debris. Lazarus was getting dangerous. It was a question by Jonathan, my youngest son, that actually cinched his retirement, “Dad, what are you going to do when Lazarus’ engine falls through the deck while you are mowing? His shut-off doesn’t work you know.” For just a moment my mind formed the image of a screaming engine, blade attached, breaking free from the rest of the mower and chasing me around the yard like the Tasmanian Devil.

I am sure there was resignation in my voice as I took a deep breath and responded, “Jonathan, you make a good point. It is time to put Lazarus to rest.”

I parked Lazarus in the basement, telling myself that I would use him for parts. But because all of his parts are rusted together or rusted through, I knew I was just kidding myself. Still, who knows? I bet if I asked him, he would bellow, roar and spew sticks. What else would you expect from a mower named Lazarus?

I eventually gave Lazarus to a handy man who promised to recycle whatever usable parts he still had.  My current mower is a used green one (very similar to Lazarus)  that I paid $50 for. Does this one have a name? Not yet, but once he earns one I will gladly tab him with it.

I have a hunch that giving him a name will extend his life an extra five years.

Have you ever given your lawnmower a name?  How about a car?  Do you think it lasted longer after being named?