You are here: Home / Biblical Thoughts On Finance / Procrastination: What Is It and Why Do We Do It? 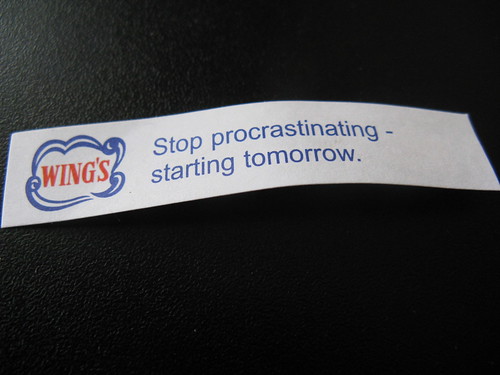 “For you yourselves are fully aware that the day of the Lord will come like a thief in the night.  While people are saying, “There is peace and security,” then sudden destruction will come upon them as labor pains come upon a pregnant woman, and they will not escape.”  I Th 5:2-3

This passage begs this question, “If we know that certain events are going to happen, why do we fail to take preventive actions?”   This isn’t just about end times theology; it is about putting off what we know we need to do.  We know we are going to die, but 55% of American adults don’t have a will.   Money magazine says that 78% of us will have a major emergency within any given 10 year period, yet many never create an emergency fund.  How many of you (especially age 50 and above) get annual physical exams?   You understand that your body WILL break down if you don’t care for it…don’t you?

What exactly is procrastination?

A dictionary definition is “To postpone or delay needlessly.”  Our bible passage tells us that people lull themselves into inactivity by saying, “There is peace and security.”   The issue, as I see it, isn’t simply not taking immediate action – it is putting it off and putting it off more and continuing to put it off until it becomes so fuzzy on our radars that it is eventually forgotten.  Wojo at Fiscal Fizzle, in his post 5 Financial Items We Tend to Procrastinate, named budgeting, income planning,  home inventory, insurance and investment management as five such items.  Have you ever put any of these off till you simply forgot about them?   Uhhh…me too.

Why do people procrastinate?

These are arousal types who wait for the last minute in order to get the euphoric rush.

This group is characterized by fear: fear of failure or even fear of success.  They are very concerned about what others think of them, and would prefer that others believe they lack effort than ability.

As the name describes, these people cannot make decisions.  In their minds, not making a decision absolves them from responsibility for the outcome of events.

According to Dr. Ferrari, procrastinators tell lies to themselves, such as, “I’ll feel more like doing this tomorrow” or “I work best under pressure”  or “time pressure makes me more creative”.  Reality is that they don’t get the urge to do it tomorrow nor do they work best or become more creative under pressure.

When people have unrealistically high standards and expectations, coupled with lack of confidence in their ability to complete a project, they find excuses (such as “I need to study this more” or “I need to acquire more information”) that will prevent them from attempting the project.

Feelings of anger and resentment toward a superior or authority figure can translate into unwillingness to do what has been assigned.  This would also include anger at having a task that one is unwilling or uninterested in thrust upon him…especially if he has previously expressed these views and been ignored.

When people harbor thoughts that they are not good enough, or that they always fail or that they are just stupid and incapable, they have a very difficult time attempting a project.   Important projects, for those with negative thinking, are the most difficult to undertake because they feel too inadequate to be handling something of this magnitude.

Procrastination is to postpone or delay needlessly.   Experts agree that it is more than simply laziness.  Certain personality types tend to procrastinate for certain reasons.  If we are going to start dealing with important issues in our lives, we need to better understand why we procrastinate.   I learned that I sometimes fail to start certain projects because I don’t have the confidence that I can do it adequately.  However, I have also learned by experience that once I plow in,  my feeling of inadequacy is usually replaced by ingenuity.

One issue all of us need to address is the one alluded to at the beginning of this post: dealing with your eternal destiny.  I hope that you won’t be like the people who lie to themselves, saying “peace and security” when destruction could come any moment.  This is one issue NOT to procrastinate about.

Do you procrastinate?  About what?  Does this post help you better understand why?  In what ways?