You are here: Home / Budgeting / Five Reasons Why a Penny Saved is Better Than a Penny Earned 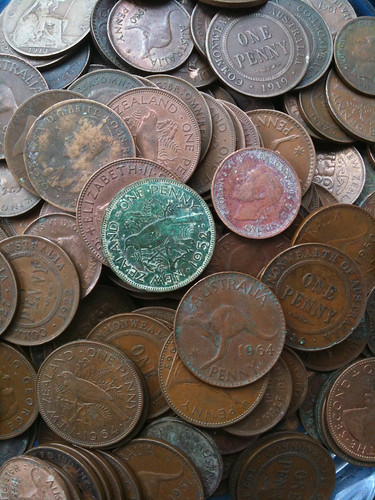 The value of the saved penny became apparent in our household two months ago when Janice announced that we were not going through another summer with our scruffy, moldy and mildewed deck furniture. I confess that I am clueless about deck furniture, especially the pricing, so I tentatively asked, “How much? And where will the money come from?” Janice was ready for me. She had already shopped, found what she wanted at 60% off retail and devised a plan to pay for the furniture. I love this gal!

What is her plan? Very simple: save cash from our envelopes each month. I realize that one shouldn’t have fluff in the envelope budget, but Janice, who controls the envelope spending, was stashing away cash without me even realizing it. “How?” you may be asking. By slashing our grocery and eating out spending. Janice took “tightening our belts” literally: zero eating out and more diligent bargain shopping for groceries (double coupons, 10% discount on Senior Citizen Day, bargain bin meat purchases, etc.).

I am convinced that we will have new deck furniture this summer, paid for with extra savings, not extra earnings. Janice’s plan causes me to realize several reasons why a penny saved is better than a penny earned.

We will have our new deck furniture because Janice has a very focused goal. She knows what she wants, she knows what it will cost and she has a plan to get there. As a semi-retired couple, earning extra money would require one or both of us to take on a part time job. Let’s compare…no eating out for a few months…or seeking, finding and holding down a part time job. Hmmm. My belt needed to be tightened a bit anyway.

Because saving forces us to manage a finite amount of money, we must innovatively find ways to live on less. Earning more, on the other hand, usually promotes sloppy money handling. Answer the following question: “Specifically, what did you do with your most recent pay raise?” If you are normal, it simply disappeared. I rest my case. More earnings will slip through your fingers; saved money is squeezed.

3. Preparation for the unknown

You never know when you might lose your income stream, but if you have practiced saving those pennies, you will be able to cope much better when the unexpected happens. Hint: save for emergencies before they come!

The lessons you learn on saving those pennies will take root in your psyche, giving you a mindset and confidence that you can indeed live on less when you decide to do so. Therefore, whether you are paying off debt, building an emergency fund or investing for retirement, you will succeed because of the seeds of success you have previously sown.  Consider this: if you do a great job of saving, your income could actually increase.  How?  By using that saved money to create money.  To stimulate your thinking, here are some great passive income ideas.

Whereas only the interest earned on savings is taxable income, all earnings are taxable. For example, if you earn 3% on $1,000 savings,  you would pay taxes on $30…$7.50 if you are in the 25% incremental income bracket. On the other hand, $1,000 earnings will cost you $250 of income taxes under the same scenario. Stated differently, you would need to earn $1,323 to net the same as saving $1,000. Had Benjamin Franklin paid income taxes (no one did until their inception in 1862), he would have surely realized that a penny saved is better than a penny earned.  I imagine Benjamin, in today’s world, would investigate other tax savings such as energy tax credits.

This post in no way infers that earnings are not important. I hope you have a great and growing income stream. But earning more money is of no value until you learn to save. A penny saved is even better than a penny earned because savers develop frugal living habits which give them confidence and ability to cope even when life sneaks up on them. Besides, saved pennies are taxed less than earned ones.

Footnote: our back up plan is to cash out our quarter jar…worth maybe $200. With apologies to Benjamin, “A quarter saved is better than a quarter earned.”

As always, I appreciate your thoughts.  Are there other reasons why saving trumps earning?  How about instances where earnings are more advantageous than savings?